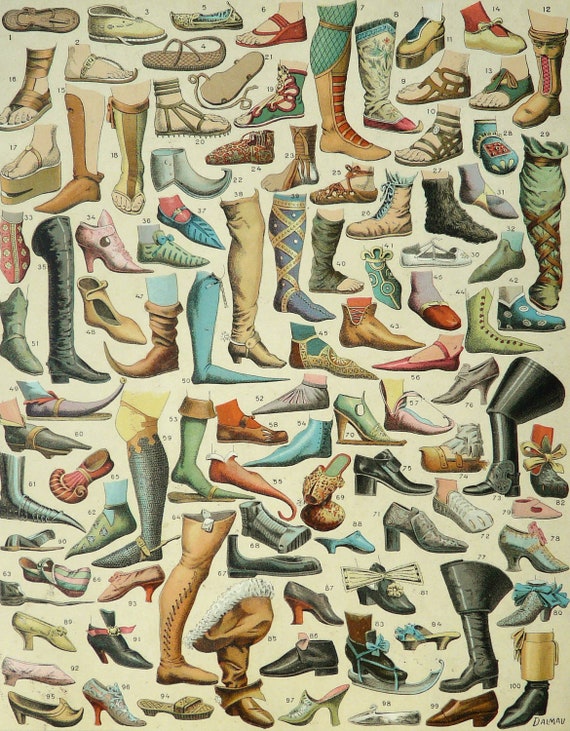 As you look at the variety of shoes , consider the foot prints. And to make sense of this clue read on!! Printed in Barcelona (Spain) by Centro Editorial Artístico de Miguel Seguí, circa 1900.

Early in the week grade 7 students were lucky to participate in a science symposium where ecologists with a variety of ecological specializations met with small groups of students to discuss environmental concerns in Malaysia. As students prepared for this gathering, discussion in humanities inevitably centred on the word symposium.

We do not carry out lengthy word investigations every day (sadly) not even every week, but every day we examine a word. Sometimes we devote half a period (45 minutes) to this, sometimes we spend five minutes, sometimes ten to fifteen minutes, sometimes students work independently and follow up what has been a tentative hypothesis in class. The result of these brief but regular forays into morphology and etymology is that the knowledge and analytic skills involved in identifying morphemes are constantly practised, so much so that it is just as often a student who will now ask, ‘How would we analyze this word?’ or ‘What is the base in this word?’- all music to my ears. Now, part way through our second trimester, I notice that students  have become more patient. They are prepared to justify their thinking and recognize that to begin research with a hypothesis and a question is so much more helpful than resorting instantly to the Online Etymology Dictionary expecting to find the answer leaping out at them. They won’t.

This is an important point for both students and teachers. The brilliance of the Online Etymology Dictionary entry is the story it tells of a word’s development. It tells us when the word entered the English language, it’s journey to English, and the language of its origin. It helps to uncover related words- words sharing the same base element or other base elements that have come from the same root. However, you have to make those morpheme connections and prove these yourself. It will not serve up the morphemes all neatly analyzed. The role of the etymological dictionary is, as the name implies, etymological.

This reference will help you to unearth a root with careful digging. And digging it is, as is appropriate with roots! One root may have radicles ( to continue the botanical metaphor) that can lead through long twisting strands back to a root in the Proto Indo European language, a hypothesised language, of approximately 5, 500 years ago. These ancient roots can be found when you follow the links through an entry. It will not provide the morphological elements- for this you need to use the evidence of the root and think what has been removed from the etymon. For example if the Latin root is in the infinitive form, it is the elements <-are> <-ire>, <-ere> that indicate this. These are the elements that are not present in an English base element . You also need to see what graphemic changes have been made to the English base as the word adapts to the new language or languages in its journey into English. So looking for the root is etymological and searching for related words and identifying morphemes is morphological. The etymology informs the morphology.

I love the linguistic metaphor of ‘root’ suggesting the interconnections of other words. This image almost shows this – a main root and from this a host of others that branch out and take life in other languages, in other words in the same language. I also love these illustrations and the work of J.E.Weaver of the University of Minnesota, famed expert of the plants of the prairies and in particular the roots of prairie plants: ‘that portion of Prairie which is seldom seen–‘the extensive and intricate “Prairie underground,” with roots occasionally extending over 20 feet deep’. I enjoyed reading how he wore a suit and sported a green eye shade when examining the roots , how his wife addressed him as Dr Weaver, how he employed students to dig 1,500 trenches for a one year study, and especially love his three dimensional photographs of roots. I applaud his obsessional focus, specialization, his detail and knowledge. Information gleaned from GardenHistoryGirl, go there to see and learn more.

You’ll note the process of slowly forming a hypothesis supported by evidence as the students below discuss their thinking and justify the morphemes in symposium. Rather than the base capturing the majority of our attention and time as it usually does, this day it was the suffix that stole the show and caused puzzlement. Where were the morpheme boundaries in this word? What makes sense in Present Day English?

A day later, one student capably summarized the class thinking and research so far.

The discussion over the suffix in symposium proved intriguing. Some students identified the base element as <posium>. Some argued for <-ium> with others in favour of <i+um>. It was the evidence they brought to this discussion that was pleasing. At this point we are arguing for <sym+pose+i+um> as we feel the words planetarium, delirium and tedium provide compelling reasons as to the existence of a connecting vowel letter <i> and the suffix <-um>. With the discovery of the word <planetary> we were able to analyze planetarium as <planet+ary+um> with the final <y> of the suffix<-ary> changed to an <i> with the addition of the Latin vowel suffix <-um>. (Go to Real Spelling tool kits to discover more about this critical orthographic convention:see Kit 1 A and Kit 3F). As the recordings above indicate, we hypothesized that delirium was comprised of the morphemes<de+lire+i+um>. We knew that the <-um> could be replaced by <-ous>.

Here’s what we discovered about the etymology of symposium.

Symposium entered English in 1580 from Latin as symposium remaining unchanged in its morphemic structure since its entry. However, its roots trail beyond Latin.

We had sensed the Latin influence with <-um> seen in words such as dictum, optimum, decorum, maximum, minimum,rostrum. Yet there was also the internal <y> in the prefix <sym-> which we knew from words of Greek origin such as sympathy, symbol, symbiosis. The Greek συμπόσιον : symposion which had come from συμπότης : sympotes: fellow-drinker, the root of which was  πότης :potes drinker. This Greek base had ultimately derived from the Proto Indo European root *po(i)-  to drink which is also the source for the Latin infinitive potare: to drink.  Latin potare has provided English with words such as poison and potion and potable!

Today symposium has altered somewhat in meaning. In Ancient Greece the anticipation at such an occasion was the after dinner entertainment of dancing, music, games and intellectual discussion conducted by aristocratic male Greeks accompanied by alcohol mixed by the symposiarch.Today, as in ancient Greece, we still anticipate a convivial atmosphere and hope for the intellectual exchange of ideas.

This word inquiry however, unearthed another etymological discovery in the word delirium. As you heard in the video clips above, we had used this word as part of the evidence to prove <-um> as a suffix. We checked that everyone understood the meaning- some thought that delirium occurred with high fevers, your mind wandered so that you were  delirious. We hypothesized that the morphemes were <de+lire+i+ous>. We could list words in evidence to prove the prefix <de-> such as describe, defeat, delight. We could provide evidence for the suffix <-ous> such as famous, delicious, malicious. The connecting vowel letter <i> was familiar from words such as malicious , delicious and insidious. However, we were stumped as to other possible words sharing this proposed base. Perhaps a base with only a very small family.

Two students discovered in the OED that there was once a word ‘delire’ now faded from regular use. This was verbal and meant to go astray, to go wrong and had entered English in 1400.  It joined the rank of other words available to metaphorically describe this moral confusion and rambling from paths of righteousness such as  misfare(OE), miswend (OE) misnim (1225),  crook (1325),wry (1369), forloin (1400) even the phrase ‘to tread the shoe awry’ (1542). All these words are used verbally and have a sense of stepping away from, being bent or veering off a path. And this is what we discovered also in the root leading to delire and delirious.

Delirium is from an agricultural metaphor of breaking away from the ploughed straightness of the furrow. It entered English from the Latin word dēlīrāre which in Latin had taken a metaphorical turn, denoted ‘deranged, crazy out of one’s wits’. (OED) Earlier in Latin the phrase de lira had referred to ploughing and to deviate from the furrow. Latin līra is furrow or ridge. Yet the story does not stop there- we have not come to the end of the track! Lira can be traced back to Proto Indo European *leis- track or furrow. We continued following this track through the Online Etymology Dictionary which, within the delirium entry, gave a link to learn. I hear your gasps of astonishment! And yes the track continues!

Learn is Old English but has derived from the same Proto Germanic root **liznêjan , *liznôjan which has a ‘base sense of to follow or find the track’ and too progeny of Indo European root of *leis-. And last the distance dear readers, the story gets even more exciting!!

We discovered that last too is part of this tale of furrows and tracks. Last is a homonym and the last of our focus on this winding trail is the noun last which survives today as in the shoe last denoting the wooden or metal model of a foot that cobblers used to make shoes. We also discovered another obsolete noun last of Old English origin, which once meant ‘a mark or trace left on the ground by the foot; a footprint, a track; a footstep; (also) the sole or lower part of the foot’.(OED)

As a verb last also once meant to follow a leader, to serve or help and is of the same Proto Germanic and Indo European roots. You can see the echoes of tracks and footprints here. It also has a current sense of enduring- to last the distance. And of course that metaphorically suggests putting one foot in front of the other, following the track until the end!

What a track we’ve followed in pursuit of delirium. It has led us through furrows to tracks and footprints and the etymologically related words: last, learn and delirium. It’s the pleasure of thinking that word inquiry provides, not fast answers to confirm rightness or wrongness, a test, or instructions to use the word in a sentence to prove your understanding, but a luxuriating in the past, a drift to other words to unearth curiosities, the interconnections of words and the images conjured through surprising metaphors that help us to see the world, and text differently.

If the ploughing and furrow metaphor is intriguing for you as it was for me and my students (!!) read this article Straight Furrows from The Telegraph UK and see images of ploughing competitions where you are penalized if deviating from the straight and narrow. I wouldn’t last and that’s my last word!

6 thoughts on “Of Symposiums and Delirium: following footprints”