Books can be a wonderful catalyst for word inquiry and through the inquiry, the text is understood even more deeply.

Christmas Eve in the trenches of France,
the guns were quiet.
The dead lay still in No Man’s Land –
Freddie, Franz, Friedrich, Frank . . .
The moon, like a medal, hung in the clear, cold sky.

So opens Carol Anne Duffy’s  poem The Christmas Truce, illustrated by Dave Roberts. Duffy’s text was used in our recent teacher workshop and with my grade 7 students. Read the poem here.

As we read this text, we wondered what it takes to create and maintain peace.  What does the word <peace> mean? How is it built? What are the relatives? What is the origin?

Many students immediately recognised that <peace> and <piece> were homophones and as such had very different meanings as they came from different roots. 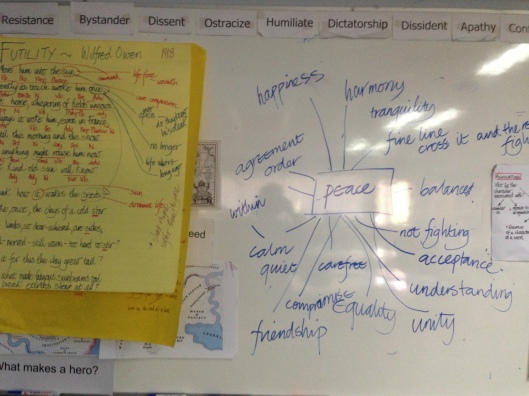 Working understandings of the word peace.

Students commented that peace leads to harmony, commented on the fine line between peace and war and noted once that line is crossed the difficulties in restoring the balance. Another said peace involves compromise, others that acceptance and understanding are key ingredients along with equality, unity and friendship. Some stated that peace meant agreement and could not occur without order. Others argued that peace must occur first for order to eventuate. As well as external peace, one student observed that peace was the sense of calm and quiet within. This discussion, prior to examining any references, allows for a nuanced understanding of the various senses and helps us when exploring the etymology to see meaning changes.

Which words are related morphologically to peace, which etymologically? Are there any that are not related? 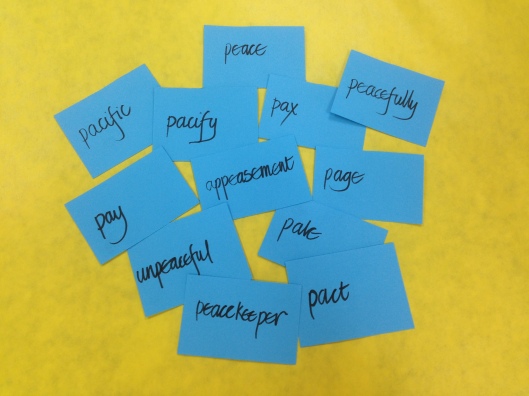 Watch below as students share their hypotheses regarding the relationships of the words above. The discussion before leaping to resources helps students look carefully at the words, hypothesize base elements, discuss connections of meaning.

Here’s what we discovered after much discussion and dictionary-delving.

Peace is a free base element. It was quickly apparent that all the words in the centre square shared this base:  <peace+ful+ly>  <un+peace+ful+ly> and the compound word <peace+keep+er>.

Peace entered English in the 12th century from Anglo-French, first attested in The Peterborough Chronicle, the earliest text used to show Middle English rather than Old English. It meant ‘Freedom from civil unrest or disorder; public order and security’.We wondered how his concept was expressed before this and discovered the Old English words frið frith; griþ: grith, were used as well as O.E. sibb, meaning peace, amity and accord (H.T.E.): ‘ It’s meaning has expanded over time:

In early Middle English <peace> was written pies and in ME pais. The final <s> was an unvoiced final consonant, later represented by <ce> .(OED). Note the role of the final non syllabic <e> ( See Real Spelling ) without which the <c> would not represent the phone /s/. (See Real Spelling 1F). We noted the digraph <ea> and briefly considered its versatility: /i:/, /eɪ/,  /ɛ/.

Peace as we discovered has in its Latin roots the notion of ‘sticking and fastening’ in order to achieve stability coming from Latin pacem~pax. We wondered whether this root, containing <a> influenced the use of the <ea> digraph in the orthographic representation of /i:/.

In our dictionary delving we discovered the Latin nouns pacem- pax: peace; Latin palus – a stake or wooden post, and verbs pangere – pactus to stick,settle, drive in, insert;  pacere to agree, to make fast, to make firm, pacare- pactus: to please to satisfy, paciscere-pactus: to agree, bargain, negotiate; and pacificare- pacificatus to pacify, appease, grant peace, make peace. All can be traced back to the Proto Indo European root *pag- /* pak- which meant to fasten. From these Latin etymons and ancient roots  we have the English words pact, pale, pacify,pay, appease, page and pagan. Highlights for us were the stories behind:

Pact: from Latin pactum, pactus, the past participle of paciscere to arrange by negotiation, agree from Latin pangere – pactus to fix, fasten and from the Proto Indo European root *pag- /*pak- “fix, join together, unite, make firm.

Pale: not , as many thought, white and therefore linked to the symbol for peace or surrender! Pale is a homophone pale-pail. It is also a homonym, therefore two different roots and entirely different meanings. The pale connected with peace entered English from ‘Anglo-Norman and Middle French pal (French pal ) stake’. (O.E.D.) Initially in the 13th century, when it entered English from Anglo-French, it meant ‘stake, pole, stake for vines’ (Online Etymology Dictionary).This in turn derives from Latin palus a stake, ‘a wooden post used by Roman soldiers to represent an opponent during fighting practice’ which in turn is ‘from an extended form of the base of Latin pacere to agree, to make firm, to fasten'(O.E.D.). In 1384 pale also meant a boundary such as: ‘ a wooden fence made of stakes driven into the ground,’ then to ‘a limit, a boundary; a restriction; a defence, a safeguard.Often in to break (also leap) the pale which meant ‘to go beyond accepted bounds; to transgress’ as in the expression ‘beyond the pale’. We also discovered ‘Pale of Settlement [after Russian čerta osedlosti: ‘boundary of settlement’]. This was ‘a set of specified provinces and districts within which Jews in Russia and Russian-occupied Poland were required to reside between 1791 and 1917.’ (O.E.D.)

When constructing the matrix below, we also discovered the obsolete word ‘palis’ meaning ‘a fence of pales; a wooden palisade or paling’. We felt justified then in adding <-is> as a suffix in our matrix. We also made the surprising discovery of palette and pallet. Could there also be a bound base <pal> which would explain the doubling of <l> in pallet? Prepare to be further astonished by pole and travail! 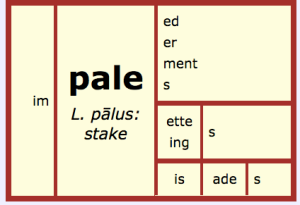 Pay entered English in the 12th century via Anglo-French paier, paer which in turn derives fromLatin pacare to pacify (Durkin). Etymologically ‘pay’ suggests to quieten someone down, to appease by ‘giving money that is owed.’ Today the quietening down is not the primary sense, instead the idea of money dominates the meaning.

Pagan: Did you know that pagan too is connected to sticking and pales? Ayto tells us that Latin pagus meant ‘something stuck in the ground as a landmark’. Latin paganus, referred to a country area, village or rustic in the sense of a civilian. A civilian then was one who was not mīlēs, a soldier in the sense of soldier of God. Another suggestion proffered by the O.E.D. is that Latin pāgānus is ‘of the country, rustic’ reflected the fact that the older forms of worship remained in the rural villages while Christianity was accepted in the towns and cities of the Roman Empire. The familiar sense of ‘pagan’ as ‘heathen’ occurred from ‘an interpretation of paganus as denoting a person who was outside a particular group or community, hence ‘not of the city’ or ‘rural’. Read about the Old English synonym hæðen: heathen here.

And we return to the Christmas truce or truces, not as yet peace, rather moments of an informal cease-fire.

We see British riflemen Andrew and Grigg (center) during the Christmas Truce with Saxons of the 104th and 106th Regiments of the Imperial German Army.

While not official, over 100,000 British and German troops were involved in some sort of ceasefire on the Western Front. The first truce on Christmas Eve began in the Ypres region, when German troops placed candles and Christmas trees on their trenches and sang Christmas carols .

In 1915 truces were not nearly as widespread as in 1914, due to orders from both sides prohibiting fraternization. After the battles of the Somme and Verdun, and poison gas, the idea of truces disappeared.

“There I found an extraordinary state of affairs – this am. A German shouted out that they wanted a day’s truce & would one come out if he did; so very cautiously one of our men lifted himself above the parapet & saw a German doing the same.” See Guardian: General Walter Congreve VC letter to his wife about the 1914 Christmas Day truce in the trenches.

Read the informative Christmas Truce on Mike Dash’s blog:A Blast from the Past and to better understand the word truce, watch as we did Gina Cook’s brilliant uncovering of the root and its etymological relatives in The True Story of ‘True’.