This could be titled: “The Big Ask”! Shock, horror and repugnance- a nomilization! Surely wrong! Read below about conversions and nomilization and reactions to this. Illustration by Harry Furniss for Dicken’s Oliver.

“We are not nouns, we are verbs. I am not a thing – an actor, a writer – I am a person who does things – I write, I act – and I never know what I am going to do next. I think you can be imprisoned if you think of yourself as a noun.”~Stephen Fry

I’ve struggled teaching grammar- so many texts with mindless exercises that don’t seem to help student understanding. Students in such exercises are often marked right or wrong and in the end that’s all the students know- they were right here or wrong there but with no further clue as to why. In order to discuss writing, to analyze texts we need specific terminology. However, rather than just handling grammar as a labelling exercise, I wanted students, and myself, to have a deeper understanding about word classes …. and to be able to justify these.

I began, for want of a better place, with nouns.

When discussing nouns, Ritchie (English for the Natives) observes ‘when traditionalist grammarians, who like all traditionalists, prefer their reality simple, their categories fixed and their heirachies solid, have a real problem… grammatical categories just don’t form neat groups with clear boundaries. Word classes aren’t discrete but ‘fuzzy’. There isn’t a list of defining membership rules for all parts of speech, rather they are organized by family resemblances, by prototypes which form a core element of a category, with other items assimilated to the same category by varying degrees.’

We experienced this degree of ‘fuzziness’ in our noun-spotting. Yet paradoxically, this ‘fuzziness’ has deepened our understanding of nouns.We have had rich conversations, asked many more questions than found answers, and sparked a flutter or inquiries.We have gone beyond the rote categorization of ‘person, place or thing’ and in doing so struggled with the concept and functions of nouns.

What makes a noun a noun?

In response to this question, the usual statements are uttered that a noun is a ‘person, place or thing’. And this has always been my difficulty with grammar-labelling as it often limits and doesn’t really address ‘noun-ness’. I asked students to identify nouns in a piece of text from our graphic novel The Odyssey by Gareth Hinds. We examined the text carefully. Are there common features about the position of the noun in relation to other words? Are there morphological features in common? What patterns can we notice?

Nouns, along with verbs, adjectives and adverbs are regarded as ‘lexical words’ the main meaning carriers, that belong to an ‘open word class’ . Why open? New entries to the language are constantly added to these word classes. In contrast the ‘closed classes’ are pronouns, determiners, prepositions and conjunctions as they are rarely added to.These words are known as the ‘function words’ and as such they have a structuring role in a sentence. When we ‘borrow’ words ( although appropriate may be a more accurate account) many are nouns. Hitchings writes that three quarters of the words absorbed into English in the period between 1250 and 1450 were nouns. Many of these of course referred to new discoveries- material things, experiences and attitudes. Nouns are always absorbed more frequently, whereas as the adoption of function words into the language is far more rare and indicates a deep connection with the original culture, an engagement with concepts rather than stuff. I recently learned of this through Gina Cooke’s brilliant course Old English for Orthographers where we saw that the adoption of ‘they’, ‘them’ , and ‘their’ from Old Norse revealed the extent to which the Vikings had integrated with the local population.

Nouns are a vast collection. We have discovered that nouns are the most heavily populated of the word classes, outnumbering verbs roughly three to one (Jackson, Ritchie).

Below, in bold, after much discussion, are the nouns we identified.

‘Lord Poseidon whose dominion embraces the whole earth, hear our prayer: glory to Nestor and all the line of Neleus, good fortune to every man of Pylos in exchange for their sacrifice, and swift success to Telemachus and myself in our mission’.

‘His strength and bulk terrified us, so that we cringed in the shadows as one-by-one he milked his fat ewes, curdling some of the milk for cheese and leaving two great pails to drink from.’

Identifying the nouns and how we decide on their ‘noun-ness’ has led us into interesting waters. 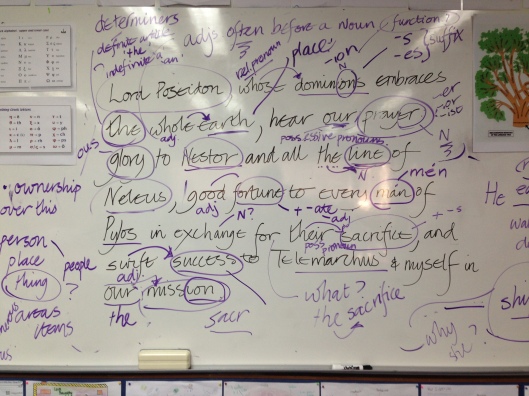 A record of our discussion, connections and questions. Thinking about language is messy; it’s more than an easy categorization.

Here’s what we have noticed:

Names and places: Nouns can be names of people : Lord Poseidon. Some of us knew the term ‘proper nouns'( we did not go into the distinction between the term proper nouns and proper names,  see here if interested.) Nouns as proper nouns also can be places, days and months. They are specific and refer to a particular place out of many, a specific day out of all the days, a specific month out of all the months and as such, they are marked by an initial capital letter. Yet this is not to us clear cut and we wondered about usage such as: ‘The December sun beat down on us’ . Is ‘December’ still a noun or is it now modifying sun and in that case an adjective? Or is it to be considered as one unit- December sun, a compound and in this sentence then a noun?

Adjectives: The position in the sentence can give clues as to the function of a word. We saw that if there’s an adjective, it’s often, but not always, placed before the noun  ‘the whole earth’, ‘good fortune’.

Subjects and objects: Word order in English is important. Nouns plus words associated with them can be the subjects in sentences: Lord Poseidon,…. hear our prayer. Nouns can also be objects in a sentence: our mission, our prayer. Often in English, although not always, nouns and their phrases occur as subject, verb, object.

Prepositions: Nouns can occur after prepositions:’to Nestor’, ‘of Pylos’

Plural suffixes: Nouns can be plural- which is indicated often, not always, by the inflectional suffix <-s> and <-es>. We saw that if we substituted the plural form for the singular and it made sense, most likely it was a noun so < prayer+s>. ‘Sacrifice’ we knew could like many nouns, be used verbally. However, with the adding of their before sacrifice and testing with the plural suffix <-s> helped us determine that sacrifice here in this text, was functioning as a noun.

Base changes in the plural: However, we also saw that it wasn’t just the suffix <-s> or <-es> that makes a noun a plural, we noticed sometimes the base of the word changes as in ‘man’ ~’men’. We are wondering about this and gathering more examples. Is this vowel change to the base element when creating the plural,  only in words of old English? ‘Foot~feet’, ‘tooth~teeth’. And what about ‘leaf’~ leaves, wife~wives, dwarf~ dwarves but the oaf but not ~*oaves!  More evidence needed, right now we’ll gather data, then investigate! (See Real Spelling, Kit 1B The Plural Suffix <-(e)s> the Basic Pattern)

Cases: English nouns in the present day have lost many of its cases but can mark the genitive case through <‘s> in the singular and usually <s’>in the plural: ‘Poseidon’s wrath’, ‘the suitors’ greed’.

The derivational suffixes: The suffix <-ion> is a huge clue as to ‘noun-ness’ : dominion, mission. But we also noted words like function, station which can be used verbally: I function well as a team member or I station myself by the door to welcome guests.

The agent suffixes: The  derivational suffix <-er> can  indicate that a word is a noun. It can convert a verb to noun so  the verb pray becomes a noun <pray+er> the words that pray, request or beseech. <-er> can be an agent suffix, agents being people or objects that do something. We discussed other agent suffixes such as <-ian>, <-ist>, <-or>. We’ve now started a list of words with these agent suffixes.

Many nouns can swap word classes for example words that are adjectival can often be used nominally: ‘the swift and the nimble will be rewarded’, ‘the long and the short and the tall‘, ‘the good, the bad and the ugly.’ We discussed how verbs can be converted to nouns by adding the suffix<-ing> creating a gerund: Running is a favorite sport in our class.

We also talked about further dividing nouns into abstract and concrete, count and uncountable and noting interesting features about them. Do abstract nouns take plural suffixes? We tested this and with these words thought ‘no’, *happiness+es, *laughter+s, *luck+s *anger+s… but then joy+s is possible: ‘The joys of teaching are numerous’, Freedom+s is possible: ‘the promotion of universal respect for and observance of human rights and fundamental freedoms’ (UN Preamble Declaration of Human Rights). We wondered about <*justice+s> – it does not seem possible to add the plural suffix here unless you are referring to people who are justices yet its opposite <in+justice+s> is possible.

Listen to summaries of our noun- spotting below:

Noun-spotting, not such a big ask! We’re now seeing them everywhere and classifying them according to our observations. And what of the word noun itself? A noun of course, attested in English in the 14th century from Anglo-French, from the Latin root nomen: name! Old English also used name to mean noun. (Online Etymology Dictionary). We are actually looking forward to exploring verbs! Oh the clamour for the glamour of grammar!

Those Irritating Verbs as Nouns

The Dark Side of Verbs as Nouns: